Last night I dreamt I went to Manderley again 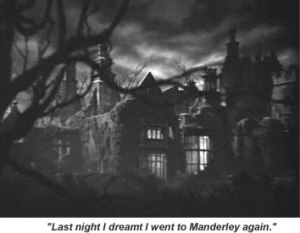 I recently rewatched the classic Hitchcock film of the novel Rebecca starring Joan Fontaine and Laurence Olivier. The first line of the novel, quoted in the post’s title, is one of the most memorable first lines in any novel. Watching the film made me think about how underrated du Maurier is as a novelist. In Rebecca the characterisation is very accomplished and the house itself takes on an eerie presence. My absolute favourite though has to be Jamaica Inn with its setting on bleak Bodmin Moor – a thrilling story of smuggling and Gothic horror.  Many of her novels have leant themselves to film or TV adaptation and one of the most successful was her short story Don’t Look Now set in Venice and starring Julie Christie and Donald Sutherland. This is the only film that has made me scream aloud in the cinema!

Why not give her novels a try !